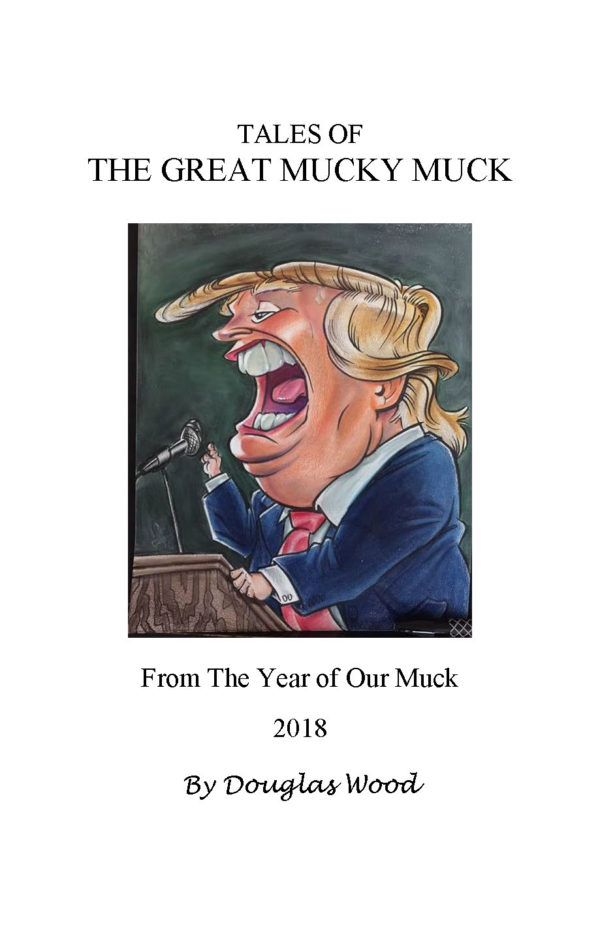 Tales of the Great Mucky Muck: From The Year of Our Muck 2018

From best-selling author Douglas Wood comes a collection of poems and other writings about the Great Mucky Muck of 2018.

Here is one of the pieces from the book.

THE GREAT MUCKY MUCK WAS ON BORROWED TIME,
On account of the muck and the sleaze and the slime;
On account of being smart as an old box of rocks,
As sly as a guinea hen—not as a fox;
On account of his hiring ‘only the best’–
A big ball of squirming snakes in a nest;
On account of his ‘tweets,’ on account of his ‘twitter,’
On account of he needed his own baby-sitter;
On account of his strange fascination with Vlad,
Who made him be worse, when he was already bad;
On account of Bob Mueller, the old Frontier Tracker,
Who could track any slacker or slow-witted hacker,
On account of the deals the Muck couldn’t get done
When he said he was the only-est, loneliest one
Who could “fix it,” whatever that “it” thing might be,
It was him, only him, Yessirree only HE!
On account of the thousands and THOUSANDS of lies,
That poured out of his mouth—like carrion flies;
On account of he saw nothing good, nothing right,
Nothing kind, nothing sweet, that might cast a warm light
In the Mucky Muck darkness in which he must live,
With a whole bunch of NOTHING to have or to give;
On account of his heart was the size of a nut,
From the kind of a tree that would have a nut, but
Perhaps it was more like the size of a pea,
That you’d need a big ‘Super-Snoop-Scope’ just to see;
But the Muck didn’t miss his small heart very much—
He was too busy lying and scheming and such;
And that’s how it happened… that Old Tracker Bob
Closed in on the Muck and his Mucky Muck Mob,
For their days were now numbered—they were on borrowed time.
Their sad tale to be told in a poem and a rhyme.

There are no reviews yet.

Be the First to Review “Tales of the Great Mucky Muck: From The Year of Our Muck 2018” Cancel reply